Standard Chartered Kuala Lumpur Marathon (SCKLM) 2018 is coming up and we have these 4 awesome runners who will be competing in Malaysian Men’s Full Marathon Category!

We are doing a poll to determine by our community of runners on who will be predicted as the CHAMPION of this category. Place your votes below!

But before you place your votes, let us share a bit on who are these 4 awesome runners we have chosen and why.

OW YONG Jin Kuang
Jin Kuang is among those groups of runners who started young.  He used to join one running competition after another.

In 2008, he joined his first full marathon at Penang Bridge International Marathon with a timing of 3 hours and 12 minutes.

His personal best in Tokyo International Marathon 2017 last February with a timing of 2 hours 42 minutes.

He has participated in SCKLM for 5 times and managed to get 3rd Place in SCKLM 2017 Malaysian Men’s Full Marathon Category.

LEO Tan
Tan Huong Leong a.k.a. Leo Tan is a natural born Malaysian. However, he’s been living in Taiwan for 5 years now and currently working as an electrical engineer.

In December 2016, he joined under the full marathon category for Taipei Marathon. Two months later, on the 12th of February, this electrical engineer joined the full marathon at Kaohsiung International Marathon. Leo finished strong with a timing of 2 hours and 33 minutes.

Leo participated in Tokyo International Marathon 2017 and clocked a personal best of 2:28:19 and broke the national record in the marathon.

Leo has participated SCKLM for 3 times, got 2nd place in SCKLM 2017 and was an exponent representing Malaysia in KL SEA Games 2017 Marathon and came back the 4th placing.

MUHAIZAR Mohamad
This 31-year-old down-to-earth guy, achieved his first gold medal in Penang Bridge International Marathon back in year 2013. Having never trained professionally in his previous years, he marveled as he was podiumed with outstanding results.

Being the first runner up of more than 30 marathons, however Muhaizar claimed that his best runs were Standard Chartered KL Marathon 2016 and Sultan Mahmud Bridge International Run 2016 for his personal best timings. In SCKLM 2016, he fulfilled an excellent result at 2 hours 30 minutes.

Muhaizar has participated in SCKLM for 3 times and was winners for SCKLM 2014, 2016 and 2017 consecutively. He was also an exponent representing Malaysia in KL SEA Games 2017 and bagged the bronze medal in Marathon.

NIK Fakarudin
NikFakaruddin is one of those easy-going guys you’d love to hang around. Born in Sarawak and raised mostly in Kelantan, Nik has had quite a nomadic life in his schooling years.


Since 2009, he had never missed the yearly national army track and field competition, competing in both 5,000m and 10,000m category. As recent as 2017, he managed to get the third place for both categories.

Nik has participated in SCKLM for 2 times, both half marathon category (21 km) and won 1st place on SCKLM 2016. 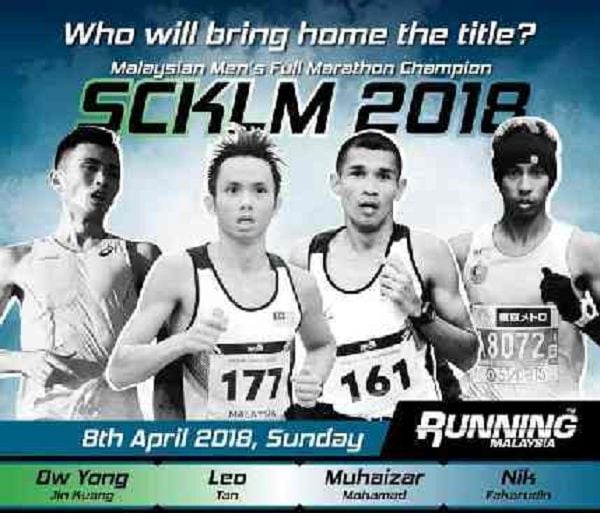 Who Do You Think Will Win?
Created with PollMaker

Elaine Lo - February 28, 2020
0
Have you ever wondered what other activity besides running would make you the best at running? Even if you are not a sports fanatic,...

The North Face Futurelight, One Shell On All Day

Elaine Lo - December 10, 2019
1
If you have climbed Mount Kinabalu, you must have seen this man carrying towering loads on his back, climbing up and down mountains, lugging...

Ten Times Ironman! Jeff Lau Did It In Ten Days!

Lim Siaw Hua Runs Marathon des Sables For A Cause

Elaine Lo - March 25, 2020
0
The Tokyo 2020 Olympic and Paralympic Games will be delayed about a year due to the global coronavirus pandemic.Originally scheduled to begin on 24...

RUNNING MALAYSIA is the first running magazine in Malaysia that puts forward the best of the interest of all runners across the nation. Dedicated to deliver the latest running news, events, tips, gadget features, nutrition and wellness advice, Running Malaysia is the one-stop source for information of running enthusiasts and athletes from amateur to experienced ones.
Contact us: josephseow@running-malaysia.com

Running Malaysia - March 27, 2020
0
The Saucony Peregrine gives confidence when it comes to how it rides as it’s a versatile terrain option.For 2020, they stepped up their game...

Elaine Lo - March 26, 2020
0
When it comes to running, strength training, or all kinds of workout styles, you will want to make sure you're wearing a sports bra...

Elaine Lo - March 25, 2020
0
The Tokyo 2020 Olympic and Paralympic Games will be delayed about a year due to the global coronavirus pandemic.Originally scheduled to begin on 24...

What You Need To Know About Reebok Floatride Run Fast Pro

What You Need To Know About Saucony Triumph 17

Nike React Infinity Run, To Infinity And Beyond

Why Virtual Runs Are Getting More Popular